In progress shot of a Japanese Backpiece 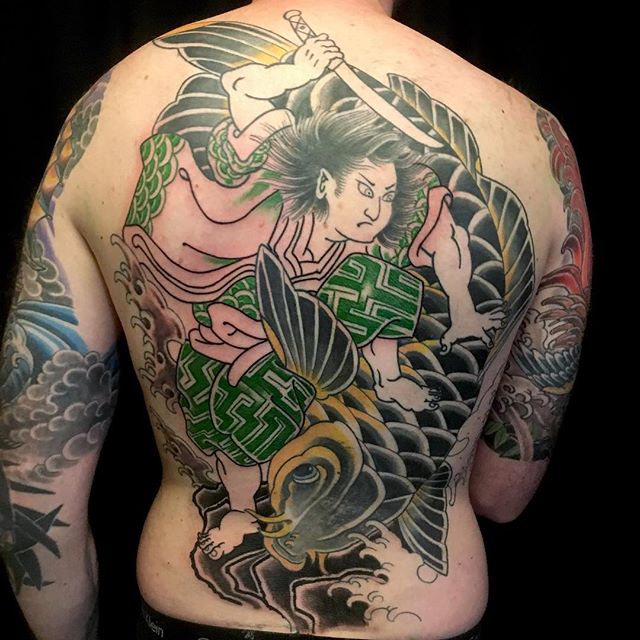 Tattooing for spiritual and decorative purposes in Japan is thought to extend back to at least the Jōmon or paleolithic period (approximately 10,000 BC). Some scholars have suggested that the distinctive cord-marked patterns observed on the faces and bodies of figures dated to that period represent tattoos, but this claim is by no means unanimously accepted. There are similarities, however, between such markings and the tattoo traditions observed in other contemporaneous cultures.

In the following Yayoi period (c. 300 BC–300 AD) tattoo designs were observed and remarked upon by Chinese visitors. Such designs were thought to have spiritual significance as well as functioning as a status symbol.

Starting in the Kofun period (300–600 AD) tattoos began to assume negative connotations. Instead of being used for ritual or status purposes, tattooed marks began to be placed on criminals as a punishment.

The Ainu people, an indigenous people of Japan, are known to have used tattoos for decorative and social purposes. There is no known relation to the development of irezumi. The process of irezumi was very painful for the tattooist as well as the “victim” as the tattooist had to endure much screaming in pain.

You are here: Home / Featured Tattoo / In progress shot of a Japanese Backpiece